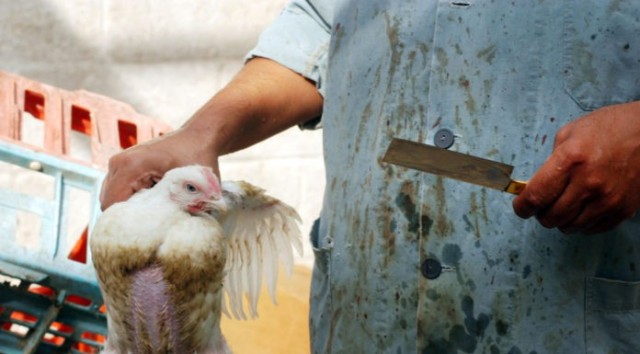 In going through some old news items of the 1940s, I noticed that a Mr. Nathan Schwarz of New York City got into trouble for handing out leaflets criticizing the cruelty of kosher-killing. He was not only assaulted by the followers of Yahweh but spent a night in jail as well.

Later he was put on trial, from which he emerged victorious. His defense was that he was protesting against cruelty to animals.

The most interesting part of the trial was the testimony of a Jewish “expert” who maintained that kosher-killings are not cruel. He said that chickens flopped around when they are slaughtered because they are simply showing muscular reactions, not pain. (He carefully avoided talking about cattle and sheep.)

Now, I am no authority on this matter, but I would be surprised to learn that birds and domestic fowl feel no pain whatsoever when injured or killed. Certainly livestock feel pain aplenty when hurt, and they suffer unnecessarily when kosher-butchers take their lives. Ordinary butchers either kill or stun animals before cutting their throats. On a small scale, the animals are sometimes shot in the head with a small calibre rifle. On a large scale, as in packing-plants, they are hit with a sledgehammer. Jews, however, prefer to slit the throats of animals while they are fully conscious and then let them slowly bleed to death, irregardless of their sufferings.

The idea behind all this, as near as I can make out, is to get more blood out of the meat, and the idea behind this is to please Yahweh. The Jewish tribal god doesn’t want his followers to have any of the blood, wanting it all for himself. The Old Testament clearly shows that Yahweh is very fond of blood. (The blood drains into the ground from which the Big Jew in the sky secretly extracts it at night, slurping it down.)

This is why the ancient Jews were always making bloody sacrifices to their god. For example, in 2 Chronicles vii, 5, we read that: “And King Solomon offered a sacrifice of twenty and two thousand oxen, and a hundred and twenty thousand sheep. So the king and all the people dedicated the house of god.”

This adds up to 142,000 animals. It is not likely that Yahweh’s Darlings sacrificed even one percent of that number of oxen and sheep at such a ceremony, which shows what great prevaricators they are. But this is beside the point. The point is that whenever Jews do slaughter animals they do it in a barbaric fashion, which is cruelty to dumb animals.

However, if the Jews are right, and kosher-killing is not cruel, then they should have no objection if their own tribesmen are also put to death in this fashion. So, whenever there are Jewish criminals to execute, let a kosher-executioner be brought in to do the job. Have him slit the throats of these Jews and let them flop around and slowly bleed to death. They would “suffer no pain,” and it would also please Yahweh.

Like Loading...
This entry was posted in History, Jewish Question and tagged kashrut, kosher, slaughter. Bookmark the permalink.