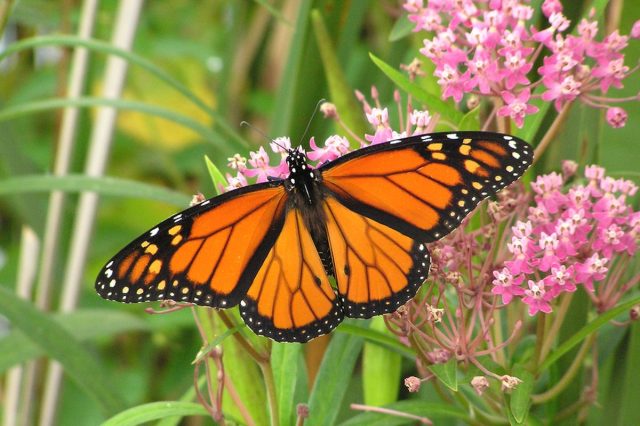 Nature presents a world of wonder which ever unrolls before our eyes. We can marvel at the simplicity of a grazing herd, or lay back on a sunny bank to watch the play of light upon the trees and mark the passing of the mighty cloud ships sailing across our heavens. On a starry night we may contemplate the vastness and wonder of that infinity of space extending from our tiny view into a dimension of time and space which our minds cannot grasp. Yet, the mighty force which created that vastness also created each of us. It performs its wonders in ways not known to man and we are fools to believe we can tamper with its workings.

Consider, for a moment, the life cycle of the monarch butterfly (Danaus plexippus). These colorful creatures of the insect world winter in the fir groves located northwest of Mexico City. As the earth tilts its northern axis in a more direct line with the sun’s life giving rays, spring arrives in the north with summer following close behind. The monarch, in great flights, leaves its winter home to travel northward into the United States and southern Canada. As summer turns to autumn the monarchs wing homeward to winter, and another annual cycle is completed. The monarchs have been doing this migration for more years than we have been on this continent and, unless man destroys their habitat, as he is in the process of doing, will continue the cycle. Well, many species of the animal kingdom migrate, not too unusual for the monarch to be amongst them. But think for a moment of the cycle from the racial view.

The life span of a monarch butterfly is, perhaps, five weeks at the outside. The monarchs which leave the winter groves know not where they are going nor do they know their destination. Unlike some larger creatures, they have no knowledge of the route they will travel nor the goal they seek. Those monarchs returning to the winter groves are several generations removed from those who left, yet, the monarchs make the journey, and they return, in an apparently endless cycle. Woven into the genetic matrix of the monarch is the route, the goal and the purpose of that annual migration. Nature has fixed it permanently in each successive generation, and we can but marvel at the wonder of the process which mandates its continuation and but guess at the means by which it has been accomplished.

The monarch is a tiny insect. It is not outstanding amongst the creatures of this earth, yet, due to its relatively short life span, we are permitted to observe in it a cycle of continuity which can only be completed by generations in advance of the contemporary one. A force far greater than any man can muster or control has formed the matrix. Such inherited characteristics are observable in all creatures. Instinct is what we call these traits and all are linked to the survival of that particular species. For the most part man has not attempted to tinker with the genetic structure of the world about him, though “genetic engineering” is now upon us as the great motivating force of our time, profit, seems to lie in that direction.

The genetic engineers who would change the human species are termed “integrationists.” It is they who seek to tamper with the genetic pools of mankind by cross breeding of the races. It is they who maintain we are all “one,” and the only difference we can find between the negro and the Aryan is skin color, texture of the hair, and, perhaps, a few other superficial differences. Inside, as their religion tells them, we are all one. We are all created by the same anthropomorphic deity in his image. Humans, they feel, are something pretty special on this planet for the Creator not only made them, he also watches over their every move, and by various supplications, bribes, and tricks humans can cajole this god into granting them sway over their physical environment.

Nothing, of course, is farther from the truth. Man is moved by the same mighty force which decrees the flight of the monarch. That we do not know the purpose of human existence in no way rules out a genetic matrix which guides our destiny. Man’s earliest histories record the existence of the races of mankind as we know them today. Each race has its own genetic stamp, its own genetic destiny, and none living can know the ultimate fulfillment of any of man’s many genetic pools. We can, however, be certain the imprint of that marvelous creative force has given us a path, and intends we follow it to its end.

The breeding of persons from dissimilar genetic pools does produce offspring. We can mate with persons of other races. But what becomes of the unity, the genetic harmony of the resultant offspring of a racially mixed couple? It is probably destroyed. That golden chain of evolutionary progress is severed and the resultant child manifests a variety of emotional and physical problems not apparent to a similar child of genetic purity. To attempt to produce a cross-breed (down-breed?) human population is a crime against the natural order which mankind would most likely not survive. Certainly the survivors, if our species should continue, would be on a far different genetic course than we Aryans today.

The German philosopher, Friedrich Nietzsche (1844-1900), wrote of the “Superman.” He envisioned the ultimate fulfillment of our genetic potential in a human population far Superior to today’s. The intelligent use of our genetic resources would see, Nietzsche felt, a continuing advancement of the human population, both in physical and mental capabilities. Such an advancement is, of course, available to each race, not just the Aryan. Nietzsche’s concepts were deliberately distorted by those who were opposed to the National Socialist experiment in Germany in that flickering moment between 1933 and the outbreak of World War II.

Contrary to the continuing propaganda against the National Socialists, their goal was the betterment of the physical life of their Germanic branch of the Aryan family. Their leader, Adolf Hitler, sought to restore control of the resources and wealth of the German nation to the German people, with the ultimate goal being the continued progression of their genetic pool towards what ever potential nature has decreed.

The ability of those ousted from control of the German resources to influence other peoples and nations led to the catastrophic slaughter of Aryans which supposedly ended in 1945 but continues to this day. A concerted effort has been successfully made to deny the Aryan the right for racial exclusiveness and each ruling government of all Aryan nations, save Iceland alone, encourages and promotes the pollution of the Aryan gene pool by interbreeding with imported racial stocks. The genetic mixing is with peoples who have no concept of either the Aryan spirit or his world-view which incorporates the upward evolution to the natural destiny which is fixed within us. Aryan man has always lived for tomorrow. We see in our children the hope and challenge for our Folk and only by insuring that each successive generation is given the soundest portion of the available genes in our pool can we begin to feel the goal will be attained. Aryan adults protect, maintain and, if possible, improve the genetic pool, and then bequeath it to their heirs.

Man does not stand apart from nature. The imperative which directs the flight of successive generations of monarch butterflies guides us, too. As no one could seriously contemplate the cross-breeding of the monarch with the blow fly, then why do we permit the cross-breeding of the Aryan with the negro or any other stock not of our people? They have their destiny, as we have ours, and it behooves all races to pursue that destiny which leads to the Superman as Nietzsche, Hitler, and other visionaries of our Aryan race saw in nature’s majestic purpose.